In my (slowly) ongoing quest to expose myself to more shojo, I finally got around to reading Honey and Clover, which I'd pre-ordered ages ago based on the recommendations of Dirk Deppey and David Welsh. Both were right in their descriptions of the series as simultaneously silly and sweet, but there was one thing their summaries didn't prepare me for: The appearance of JonBenét Ramsey among the cast of college-aged students. 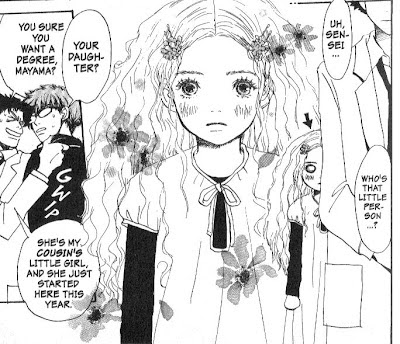 Okay, okay, according to the book, the character's name is Hagumi Hanamoto, and she's supposedly eighteen, not eight. But everyone in the story acknowledges that she looks much, much younger than her actual age. (Note that in the panel above she's referred to as a "little person" and a "little girl.") Yet two male characters fall in love with her at first sight, which is a bit creepy when you realize that what they're seeing are the features of a young child.

Worse yet, the story repeatedly infantilizes Hagumi, showing her playing with dolls and being carried around on the backs of male characters like an exhausted child. Hagumi is also silent most of the time with a dazed look on her face, which makes her look like one of those dolls that scare the crap out of you when you come upon them in the middle of the night. When she does speak, it's in simple, clipped sentences and her vocabulary is that of a child's. When was the last time you heard a college student use the words "yummy" and "tummy" when conversing with a peer?

I thought perhaps I was overreacting so I came back to the book the next day and re-read it to see if it was as bad as I remembered now that I knew what to expect. If anything, the second reading was even worse, because now I noticed things I'd glossed over the first time, such as the way Hagumi's admirers fetishize her long lashes and tiny, childlike hands. Further, the fact that Hagumi is purposefully drawn like a child was driven home by the flashback where Yuta reveals why he's not very fond of Christmas. In the flashback, Yuta is drawn like a child and he looks just like Hagumi does in the present: Matthew Brady (who is probably Honey and Clover's biggest booster in the entire blogosphere) addressed the moe aspect of Hagumi's character directly, and he seems to think that creator Chica Umino is intentionally using the moe motif to explore some its more problematic aspects. According to Brady, Umino recognizes that the impulses that drive the moe fetish aren't healthy and we're meant to be disturbed by how Hagumi is portrayed. It's an interesting interpretation, but I don't get that vibe from the book itself. I agree with Matthew that Hagumi's "stunted development and impaired personality" are unhealthy, but I don't see the book sharing that position. When Yuta or others comfort or coddle Hagumi like a child, it's depicted in a way that suggests we're supposed to approve of their actions. And when characters fall in love with Hagumi, onlookers don't question the appropriateness of such affection; instead, they are awed by the fact that they just witnessed the exact moment someone fell in love.

Anyway, I was curious enough about where the series is going to reserve the next two volumes from my library, so we'll see if the creepiness of Hagumi's portrayal persists. There's still plenty to enjoy in this series, especially when it focuses on other cast members, such as the lovable rogue Morita and the kick-ass "Iron Lady" Yamada. But, man, just seeing those pages that Matthew scanned in of Morita kissing Hagumi CREEPS! ME! OUT! so I'm not sure I'll make it much further with this series.