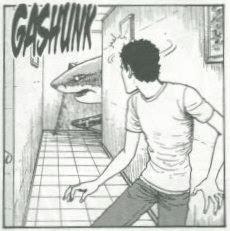 In his latest Flipped column, David Welsh (like Johanna and Jeff Lester before him) realizes that his enthusiasm for Sgt. Frog is waning. Once I got past the sheer WRONGNESS of his opinion, I wondered about manga series that I no longer enjoy as much as I used to. Which books had grown stale over time, and why had they stopped appealing to me? Here's what I came up with:

Battle Royale - The first manga I dropped before finishing, I believe. At first I was enjoying the tale of teenagers trapped on an island and forced to kill each other (in the same way you might enjoy a mindless exploitation flick — what new gruesome method of death will they dream up next?), but after reading the highly superior original novel, the over-the-top violence and gratuitous sex seemed even more unnecessary and exaggerated than before. (Keith Giffen's reworked script, which added a nonsensical reality TV angle to the story and tried too hard to be shocking, certainly didn't help.)

Made it to: Volume 5, but only because I was still preordering my comics online back then; I'd wanted to drop it after volume 3.

Death Note - Man, I loved the early volumes of this series, with the mental mind games between the main characters. They were pure crack in comic book form. And unlike many others, I didn't mind it when certain changes happened about midway through. But even I grew weary of the Endless! Exposition! in the last few books. It's like they decided just to cut and paste writer Tsugumi Ohba's overly wordy script directly atop Takeshi Obata's artwork. (To his credit, Obata did manage to make the talky scenes as dynamic as humanly possible, with lots of dramatic angles and lighting.)

Oh My Goddess! - Ah, the bittersweet sting of faded manga love. David mentions this phenomenon in his remarks on Sgt. Frog ("it was one of the first manga series I truly loved"), and it certainly applies to my relationship with Oh My Goddess: One of the first manga series I followed, Oh My Goddess has always held a special place in my heart. But lately the passion just isn't there, so it's time to call it quits. The interminable delays certainly didn't help hold my interest, but for me the final nail in the coffin was a scene in one recent volume where Keichi grows flustered because Bell falls asleep on his shoulder. Having thought the series was long past the point of playing up Keichi's awkwardness for laughs (I swear there were scenes where Keichi and Belldandy were able to show affection towards each other without it turning into an excuse for lazy comedy, but perhaps those encounters only ever existed in my fan-fic imagination), it was disappointing to see the character regressed for the sake of cheap laughs.

Made it to: Volume 26, with some of the earlier material bought twice when Dark Horse switched to the unflipped format.

Hikaru no Go - This is a weird one — it's a good series but it never grips me. Often I buy a new volume and forget to read it for months. It has great art, solid plotting, likable characters (who undergo actual development), but it still lacks something for me. Oh well, I'm sure this is a series that I can find at the library if I'm ever curious to see how later volumes turned out.

Made it to: I think volume 9 is still sitting around unread somewhere.

Yakitate!! Japan - I'll admit, I enjoyed the first few volumes, and there were always several bits in later books that made me laugh, but overall the series became much too repetitive much too fast. Plus, I think I'm still traumatized by the embarrassing experience of having a female Barnes & Noble cashier looking creeped out when I handed her this volume at the counter.

Made it to: Volume 4, with all of its attendant shameful memories.

Naoki Urasawa's Monster - This is a book I was buying on autopilot, which was made easier by the gorgeous scenery. But even Urasawa's brilliant linework can't mask the fact that I've been bored with this book almost since it began. The plot plods along with very little actually happening from volume to volume (Tenma still performing medical miracles throughout the countryside despite the fact that he's a wanted fugitive? Yep! Lunge still obsessively tracking Tenma? Yep! Johan still acting vaguely creepy? Yep!) and the characters are all stock types with no depth to them. I might have stuck it out just for the joy of looking at Urasawa's accomplished cartooning if the story were wrapping up soon, but this series clocks in at eighteen volumes! Looks like another good candidate for an eventual library read.

Made it to: Volume 8. Damn the lure of pretty pictures!

So, how about you? What books no longer have that same magic that they used to?

Bonus round: On the flip side, what manga that everyone else has given up on still rings your bells? (For me: Bleach, Sgt. Frog, Vagabond.)

UPDATE: Johanna shares her list of manga she gave up on, and Brigid solicits readers' feedback on which manga they dropped midway through.

UPDATE #2: David Welsh weighs in with his own reject list, and, her memory jogged by David's post, Johanna lists even more series she abandoned.

UPDATE #3: Alex Scott shares his quit list, and it includes not only Sgt. Frog, but Bleach as well. Oh, the humanity!