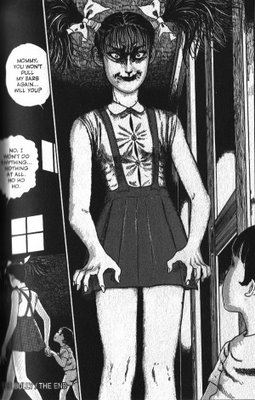 Recently it seems like more and more people are trotting out the old idea that all manga are done in a monolithic, cutesy, Disney-like artistic style. First, in his response to Matt Blind's assertion that manga are better than Western comics, Bob Holt countered that Western comics are superior because they employee a broader range of artistic styles. Manga, however, are limited by reliance on a common visual look:

The majority of manga is drawn in the moé style that evolved from Dr. Osamu Tezuka’s original contributions which were influenced by Disney.

Next, Fantagraphics art director Jacob Covey elaborated on why he thinks manga is crap [the original post where the following quote appeared was almost immediately deleted and replaced with a much shorter one]:

I said Manga is crap. The only reason I said this is that Manga is crap. As David notes, however, "The general dismissal of manga's artistic merit isn't anything new, but the added doses of cynicism and condescension made it seem somehow special." True. I AM cynical and condescending to a special degree but I am uncomfortable with an entire genre of comics being dominated by a single "look" that, furthermore, relies heavily on a masked fixation with adolescence. Perhaps that's too psychological of me but, friends, it's gross.

I dunno, maybe I do a better job of filtering out manga that doesn't appeal to me so I haven't noticed this supposedly ubiquitous manga style. Yes, if someone said to me, "Imagine The Simpsons done in a manga style," I would probably come up with a mental image much like this one, but that doesn't mean that I think all manga are actually done in that stereotypical style. (If someone said, "Imagine The Simpsons done in a Western comic book style," I'd probably imagine something like Jim Lee or Bryan Hitch doing The Simpsons, but that doesn't mean I think all Western comics emulate their art styles. Heck, not even all superhero comics have art in that vein. Acknowledging the existence of a stereotype isn't the same as granting the stereotype any merit.)

Even if we just limit ourselves to manga that's made its way to our shores, I can still think of too many ready counterexamples to the idea that all manga looks alike to take it seriously. Look at the work of Junji Ito, Yoshihiro Tatsumi, Takehiko Inoue, Naoki Urasawa, Minetaro Mochizuki, Hiroki Endo, Hiroaki Samura, Usamaru Furuya, and Iou Kuroda, to name the first few that come to mind. Heck, even the best-selling manga chart-toppers have styles that don't really resemble the cutesy "manga look" stereotype: Naruto, Death Note, and Bleach all feature artwork that wouldn't look out of place in superhero comics.

Again, maybe I'm too immersed in manga to see how it would appear to a neophyte. Maybe those who aren't already familiar with manga always happen upon examples that reinforce their stereotypes about Japanese comics. But it does surprise me that there are still some comic bloggers — who I would expect to be more attuned to various aspects of comic book culture — who have yet to disabuse themselves of the notion that all manga looks the same.

Creepy image of cutesy look gone wrong at top from Junji Ito's short story "The Bully," one of the eeriest pieces reprinted in Dark Horse Comics' Museum of Terror Volume 3, despite the fact that absolutely no supernatural elements are present in the story. 9:35 PM | |