Back in April I was wondering what readers would get for the extra dollar they'd be spending on Tokyopop manga titles. At the time, I fantasized about Tokyopop following DC's example and having backup features in each book. I realized such a bonus was unlikely, writing: "I'm assuming the price increase won't be accompanied by any additions to the manga volumes, like better paper stock or color inserts." Boy, how right I was. In fact, not only are there no added perks to offset the price hike, but Tokyopop went the other direction and gave us shoddier production values that cost more.

Comparing Sgt. Frog 17 to the previous volume, I noticed the following declines in quality:
Item 2 isn't as big a deal as I first thought it was. Looking back, only half of the previous sixteen volumes had color inserts in the front; it probably felt like more because the previous two volumes had color pages, so my working impression was that all the earlier volumes did. The third reduction doesn't really matter to me: The shiny, metallic cover was missing on the previous volume as well and I never even noticed at the time. And I really only noticed one example of defect #4 that I remember, page number 57 occurring twice, once on the actual page 57 and again ten pages later on page 67.

For me, the first flaw is the most critical. Complaining about paper quality might seem nitpicky, but it was noticeable right away, as soon as I grabbed the book out of the shipping box. The book felt flimsy. It also felt thinner, something confirmed by placing it next to an earlier volume of the series: 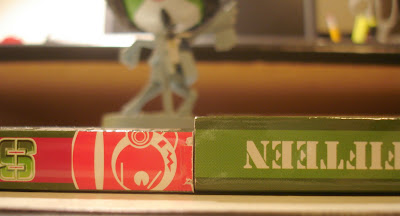 According to Amazon, the page count of these two volumes is the same.
The cheaper (ha!) paper also affected my reading experience: I noticed several spots where I was distracted by details from the opposite side visible through the page I was reading. The below scan gives a pretty good indication of what this looks like: 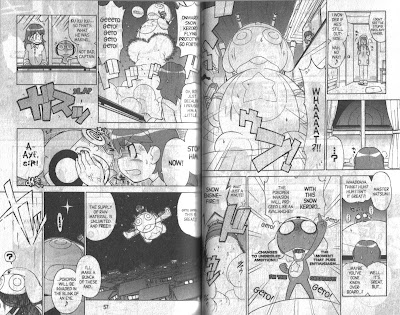 Click to Super-Snow-Keroro-size!
Compare that scan with one from the previous volume. (I generally touch up scans a bit to improve the contrast, but the scan from volume 17 was unsalvageable using my usual tweaks.)

I don't know if the combination of price increase plus decreased product quality will be enough to cause me to drop the book, but it's certainly not helping. Has anyone else noticed this with other Tokyopop titles? Is this a one time fluke or Tokyopop's new cost-cutting direction?

UPDATE: I always forget to use Google to see if others are noticing the same things I'm complaining about. Here's a thread at Anime News Network where several posters complain about the same problems with other Tokyopop series. And one poster quotes a Tokyopop rep as explaining:

I understand your concern. Paper, printing, freight has increased in price over the past ten plus years we have been in business. One of our competitors announced last week that they are raising prices higher than we did. We felt in order to keep the price of our manga down, we would change paper and only incease the average price by only 1 dollar. The other paper we used has not only increased in the cost but is getting harder to get. Sorry if there are spelling errors. I'm home sick and I'm usung my Bberry. Thanks, Allyson

I know what's she's trying to say and I feel like a jerk for mocking something someone wrote while sick, but I love the juxtaposition of "in order to keep the price of our manga down" ...we decided to raise prices. Oh, and print them on crappier paper. Corporate double-speak for the win!!

Another poster quotes something a TP Associate Publisher supposedly wrote over on Amazon:

I wanted to address a few of the comments on this thread. The paper we had been using prior to the stock you're discussing was only available from one mill, and suffice it to say, this didn't offer us a lot of flexibility with negotiating scheduling, pricing, etc., so we've been exploring other options. The new paper is different, of course, as you noted - our current printer let us know that other graphic novel publishers are inquiring about and using this paper, too. Now we are in the process of gathering feedback from consumers and other partners, and I appreciate all the candid comments as we assess its future. (BTW, our cover stock has not changed - it's still 10pt C1S - but perhaps the different paper gives it that impression.)

It also turns out that this was something the eagle-eyed Johanna Draper Carlson spotted in one of her reviews way back in February:

On another note, I haven’t checked out a Tokyopop volume in the past few months, and I was very surprised to note that the price of this volume has gone up (books this size used to be $9.99) while the quality has gone down. The newsprint-like paper feels cheap and unsubstantial, and it looks muddy. The resulting product seems unsubstantial and is unpleasant to read.

Reminder: Next time, do the Google research before wasting time writing your own redundant post.