In an article everyone's linking to, the Washington Post's Bob Thompson examines the wonderful world of sequential art. (Click here for a one-page print version of the article, and be sure to check out the illustrated version of the article.) It's a well-written piece that works both as a thorough overview of the medium's recent rise in stature and as a personal exploration of an art form unfamiliar to the author.

Of course, the bit that caught my eye was this segment: 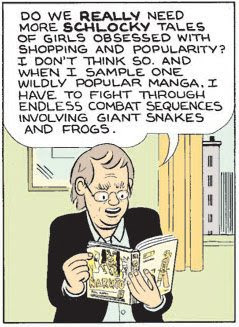 If you can't make it out from the image, that's Naruto Vol. 19 that Thompson is reading, and he goes into more detail about why he wasn't wowwed by the wildly popular series in the article.

Despite his dislike of the shonen king, Thompson does acknowledge manga's influence, citing it as perhaps the biggest factor in the graphic novel boom and pointing out its strong appeal to female readers. And he invokes the manga mantra that comics can be about anything as an ideal that Western comics are still striving towards.

Yeah, it would have been nice if Thompson had examined more than just a single volume of Naruto in order to familiarize himself with manga (or even if he had started with volume one rather than so far into the series), but his tastes seem to run more toward the alternative end of the sequential art spectrum anyway, so it's unlikely he would have enjoyed much of the manga that's currently available. (Given his enjoyment of everything else from the Drawn & Quarterly catalogue, though, perhaps he would have been receptive to one of the upscale Yoshihiro Tatsumi hardcovers.)

And besides, at least manga comes out better than superhero comics do: Thompson couldn't even work up the interest to seek out a single superhero comic. (Perhaps I should forward Thompson these lists of literary manga and superhero comics to see if he can find anything he likes. I'd actually be curious to see what he makes of Town of Evening Calm, Country of Cherry Blossoms.)

In the end, though, I'm impressed that someone self-identifying as "Prose Guy" made as much of an effort to immerse himself in comics as Thompson did. It's hard enough for lifelong fans of the medium to keep up with all aspects of the art form nowadays, so I think it's great that Thompson was able to cover as much ground as he did. And any article that favorably mentions such personal faves as Epileptic, Persepolis, and Palomar is all right by me.