Sporadic Sequential
Monday, August 18, 2008
Prints of This Image Available for the Low, Low Price of Only $450

In light of recent discussion, I was moved to create a banner image that all right-thinking proponents of truly inspirational and ground-breaking artcomix can post on their sites in support of the sure-to-be-stunning Kramers Ergot #7. When you place your pre-order for this already classic piece of avant garde sequential art, simply add the image to your site to let everyone know that you support vital art and innovation no matter what the price. 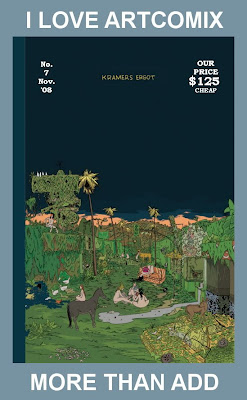 And now, the fine-print footnote that ruins the joke: I can't really criticize Alan for crunching the numbers to see if a book is worth purchasing, since that's something I do on a pretty much daily basis. I do think the discussion has gotten a bit silly at this point, with people I normally respect digging themselves in deeper and deeper as they become more entrenched in their positions. I think both "sides" have valid points, but people are now arguing past each other and investing more effort in scoring verbal zingers (as has been known to happen on the internet occasionally). But still: I think the basic point of people examining their financial situations and deciding which promising books they'll have to pass on is something we'll more and more of as budgets become tighter. I know my wife would appreciate it if I would reflect a little bit longer on our finances before ordering so many comics online. (I have been making an effort to restrain myself, passing on the Vagabond art books, choosing the paperback version of Bat-Manga!, and only ordering one dozen copies of the special Collector's Edition Bleach hardcover.)

Also, the "controversy" over the price has been good publicity as far as I'm concerned: I hadn't really thought much about the book before all this debate took place, but now I've requested Kramers Ergot numbers 5 and 6 from the library and I'm seriously considering ordering volume 7 once more details are made known.