A: When the panty flash happens to be a weaponized panty flash with explosive capabilities: 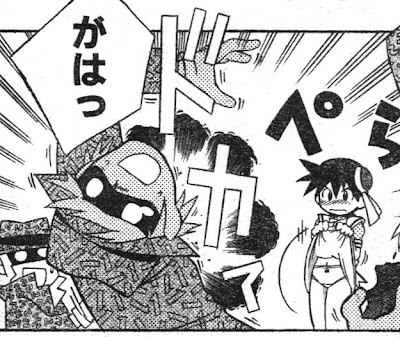 Yes, it's a schoolgirl who fights crime by flashing her panties. Manga Witchblade, eat your heart out.

Things get even more insane when the bad guy of the piece steals the girl's panties and uses them for his own nefarious purposes. (I've left out the extended sequence where the bad guy and his henchmen pin down the heroine and forcibly remove her panties. Hopefully you view my tasteful omission as a courtesy rather than a travesty.)

Yes, that's right: The bad guy puts the panties on his head, covers them with his hat, and then triggers the explosive force of the lethal lingerie by quickly removing his hat. GENIUS! Why hasn't anyone else ever thought of the head panty shot before?

Luckily, our heroine is able to arm herself with another pair of dynamite drawers (taken from her younger brother -- don't ask) and we're set for an epic showdown between good and evil!! 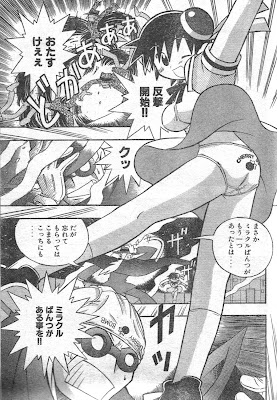 I won't spoil the fight's outcome, but suffice it to say that our heroine does live to blow up young neighborhood urchins who attempt to sneak a peek at her panties.

All images from a series whose name I can't make out from the May 2002 issue of Magazine Z.

UPDATE: Here's a scan of the title page if anyone wants to take a crack at identifying the series. 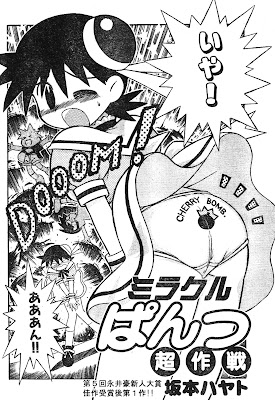 Also: I just realized Magazine Z is published by Kodansha, so here's hoping this is one of the series they release once they launch their North American operations.