Sporadic Sequential
Wednesday, October 03, 2007
All Matt Thorn, All The Time

Matt Thorn is at it again, offering information in my comments that's much more interesting and informative than anything I'm writing on the main blog. Here's a follow-up comment to his earlier edifying elucidation:

Glad you found the comment useful. Looking at the page Pope did, I can see a few things that a Japanese editor would balk at. First, it's not immediately clear who the target audience is. Adults? Boys? Girls? The "splash" doesn't convey much information. The drawing style is rough and yet somewhat realistic, suggesting an adult readership. The characters are girls in school uniforms, implying it may be targeted at girls. Yet the visual gag seems rather juvenile, suggesting the target may be boys. The target audience determines to a large degree how the opening should be presented. The second thing I find jarring is the use of a "thought balloon." Thought balloons of this kind went out of style many years ago, and are used today only as pastiches or gags. The fact that we "see" KC's thoughts also immediately suggests that the story is told from her point of view, yet all the other visual information suggests that it is JP who is the protagonist. A Japanese artist would overcome this obstacle by simply having KC speak the thought out loud in a regular speech balloon. (Similarly, manga artists today only attach "arrows" to speech balloons when not doing so might leave the reader confused about who is speaking, so the only balloon here that might require an arrow is JP's in the bottom left panel.) There are several other seemingly trivial things that would bother me if I were the editor. I think the editors must have found themselves in a Catch 22 situation. They wanted to present non-Japanese comics creators, yet they also had to meet a certain minimum of reader expectations. Let the artist do what he wants, and you alienate the bulk of your readers. Tinker with the work too much and you end up with a sub-par manga, which defeats the whole purpose of inviting foreign artists to contribute in the first place.

It's funny you picked that particular page of What's Micheal. The work is pretty old (about 20 years?) and was originally intended for an older audience, so at the time neither editor nor reader would be bothered, but today this page wouldn't pass editorial muster because of the very first panel. (Note that the page has been flopped in the translated edition.) The gutters between that panel and the adjacent panels form a perfect cross, which would leave the modern manga reader wondering whether the second panel is the one to the right or the one below. To make clear that the top right panel is panel number 2, the gutter between the top two panels would have to be shifted at least a quarter of an inch or so to the left or right. The order of the panels is obvious from context, but the reader still needs to stop for a few milliseconds and wonder, which means the artist has screwed up. The reader should be able to follow the flow of the panels automatically and unconsciously, so that the reader's absorption in the story is never broken.

As you point out, all these rules can be both stifling and helpful, and this is the dilemma of the Hollywood Syndrome (tm). Most critics would agree that Joe Sacco's Safe Area Gorazde is more powerful than Joe Kubert's Fax from Sarajevo, but the average Joe or Joanne on the street would find the latter easier to read. Spielberg, in making Schindler's List, had to break or bend many Hollywood rules (some of which he created himself) in order to keep it from becoming just another slick drama to be viewed objectively as entertainment. Ditto with Spiegelman's Maus. Similarly, a manga artist like Taiyo Matsumoto or Kiriko Nananan has to break or bend some manga rules to achieve something striking and different, but adhere to other rules in order to get the work published and actually read by a fair number of people.

Someone get this guy a blog! (Or a publisher for his Never-Ending Manuscript on Manga.)

And to illustrate the point he's talking about with shifting panels over to make sure the horizontal and vertical gutters don't form a cross, here's a page from Kekkaishi, again stolen from one of Shaenon K. Garrity's fabulous Overlooked Manga Festivals: 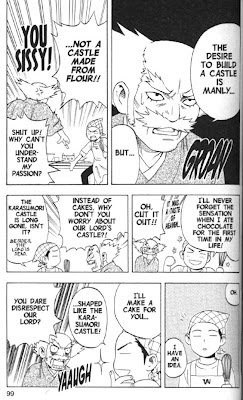 Compare that with another page from What's Michael?: 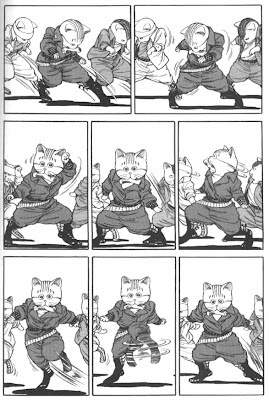 I don't know if it makes much difference to Western readers, but I can see how making it clear that the panels are supposed to be read across (rather than up-down) would be important to Japanese readers.