Found via the comments in my last post, here's Tintin Pantoja's seven-page proposal for a manga version of Wonder Woman, "Princess of Paradise" (even the title seems manga-esque). I have to say, this seems like a no-brainer (especially after the success of the Death manga) and I'm surprised DC hasn't pounced on the idea yet. Tintin, if you're reading this, can you share what happened when you submitted your proposal? Based on your sample pages, I'd love to see this published. Can we lobby DC on your behalf? 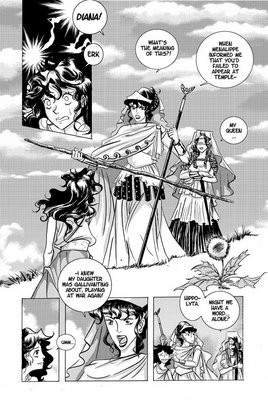 Now this looks like a Wonder Woman comic I'd actually be interested in reading.
UPDATE: Pantoja has updated her site to include a fuller look at the original proposal she submitted to DC, including a plot summary for the three-book tale and an analysis of the likely target audience. And over on her LiveJournal, Pantoja talks more about the (non) response from DC, mentioning that she'd heard rumblings about what sounds like Minx before it was officially announced.

Again, I'm surprised that DC (apparently) passed on this, since the combination of one of the most recognizable female pop culture icons (the comic might not sell to girls but I've seen plenty of merchandise bearing WW's likeness aimed at them) with the art style that predominantly appeals to young female readers seems like a license to print money. Who knows -- perhaps DC has their own plan for a manga version of Wonder Woman in the pipeline. All I know is, I want my shōjo Wonder Woman, dammit!!, and this seems like a very promising version based on the sample pages.

So, c'mon, DC! What will it take to get Pantoja's Princess of Paradise published?