UPDATE 8/27/2008 3:21 PM: The form linked from the Yen Press website is now secure, and they've updated the post to note that the subscription site is secure.

If you were planning on subscribing to Yen Press' Yen Plus anthology via their newly-launched online subscription service, STOP! The subscription form linked from the Yen Press website doesn't use SSL, so your personal information (including credit card info) is unencrypted. See the screenshot below for an example (click to enlarge) and note the lack of "https" in the URL. All other magazines' online subscription forms that I can think of use SSL from the very beginning of the transaction (see EW and The New Yorker), so I'm surprised to see this flaw. Frankly, it's sloppy and unprofessional. 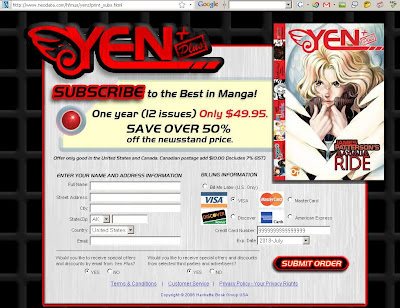 Others have already pointed out the problem in the comments section, so hopefully Yen Press will resolve this flaw soon. You can access a secure version of the subscription form by manually adding an 's' to the URL (https://www.neodata.com/hfmus/yenz/print_subs.html) but I would recommend waiting until Yen Press straightens everything out on their end.

Interestingly, this isn't the first problem Yen Press has had in setting up subscriptions for the Yen Plus magazine. First there was a long delay in getting the subscriptions up and running. The debut issue referred to a subscription card in the magazine that could be filled out and mailed in, but there was no such card to be found, a discrepancy that frustrated more than one reader. Readers were also directed to the magazine's website in the first issue, but before yesterday there had been no subscription link, just promises that online subscriptions would be coming soon. In the end, two issues of the anthology came out before subscriptions were even available.

All in all, it's hardly an auspicious launch for an anthology that had been anticipated for so long. It's even more puzzling that such amateurish mistakes are coming from an imprint of Hachette Book Group, a major publisher with a history dating back to 1837, and one headed by experienced book industry executives Kurt Hassler and Rich Johnson.