Ask and ye shall receive! In response to my call for him to address Paul Pope's characterization of the Japanese manga audience as "maddeningly conservative," Matt Thorn graced the comments and had this to say:

You rang? In a way, yes, Japanese readers are quite conservative. As I'm fond of saying, Japan is the Hollywood of comics, and just as Americans are used to the Hollywood way of making movies and have little patience for foreign films, Japanese readers are used to the Japanese way of making comics, and and are easily turned off by something done another way. Sure, there's a wide variety of subject matter in manga, and more variety of drawing styles than many people realize, but there are countless structural details that most readers (both Japanese and non-Japanese) are completely unconscious of, and yet which are necessary to make a manga "feel right." There's no manual out there listing those details, but experienced editors and artists know when something is "wrong" and how to "fix" it, and most readers, when shown the "wrong" version and "fixed" version would agree that the latter is "better," though they couldn't tell you why. Let me offer a real simple example. Have you ever noticed that the horizontal "gutters" between panels in manga are twice the width of the vertical gutters? (Forget for the moment that these days there are a lot of manga in which there are no gutters at all.) This is the way it's been done for more than 30 years, and it's done that way "just because it looks better." And the odd thing is, it actually does look better. There are literally hundreds of little things like that that are taken for granted in commercial manga, just are there are hundreds if not thousands of little rules involved in making a Hollywood movie that "looks right." So I have to disagree with Tivome; it's not just about character design and interaction, by any means. There are so many factors that go into the production of a commercial manga (and, by the way, Taiyo Matsumoto is critically acclaimed and well-known, but hardly a best-seller here in Japan), it would be a near miracle if a non-Japanese artist could hit the sweet spot after just a few months of direction from even a brilliant editor. Japanese artists have absorbed most of those details, subconsciously, over a lifetime of reading and copying commercial manga, and thus have an enormous advantage over the outsider artist. For example, almost all of my cartooning students here at Kyoto Seika University know how to lay out a page so that the reader has no trouble grasping the order of the panels. But few of them know that they know, or don't know what they know. So when I point out to them exactly how the "traffic rules" of manga layout work, most are taken completely by surprise. "Oh, so that's how it works! Now that you mention it, yeah..."

I think this is a great, succinct way of explaining how "manga-isms" work and how what might seem like intrusive interference to a Western artist trying to make it in Japan would come naturally to a native manga-ka born and bred on manga conventions. I'm sure cover ofthere are similar "traffic rules" in Western comics but we as readers don't stop to think about them. (The one that keeps coming to mind but isn't really a good example is DC's discovery that putting a gorilla on the a comic would help boost sales. No one knew why it worked, but it did, so they kept doing it!) I think the analogy of Japan as the Hollywood of comics is an apt one, as there are certain formulas used in both industries that, used blindly, can stifle creativity but can still be helpful guidelines in the right hands.

And as an example of the broader horizontal gutters rule that Matt is talking about, here is a sample page from Makoto Kobayashi's wonderful What's Michael?, lovingly lifted from Shaenon K. Garrity's most recent Overlooked Manga Festival: 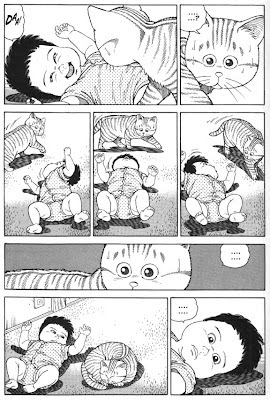 * I've said this before, but I would kill for a cheap, thick collection of Kobayashi's What's Michael? manga!