JK Parkin was kind enough to ask me to participate in part of Robot 6's weekend-long first anniversary celebration. The feature is titled "What are you excited about for 2010?" and my (not terribly exciting or enlightening) response is the last one in part 3. (Yeah! Batting clean-up!!)

Thanks to JK for allowing me to contribute, and congrats to all the hard working bloggers at Robot 6! Here's to another wonderful year of exhaustive, eclectic, well-rounded comic-book blogging!! As JK's bio for me points out, I'm kind of the Bizarro Robot 6 blogger in that I never actually blog anything anymore.

Which brings me to another thing I'm looking forward to in 2010: My retirement from blogging.

After three and a half years of blogging here, I've decided it's time to call it quits. My output was never prodigious: in 3.5 years I only managed just over 400 posts, which puts my blog's developmental maturity much lower than its calendar age. The fact that I could only muster seven posts in the last five months of 2009 is pretty clear evidence that my heart just wasn't in it anymore. One of my personal blogging benchmarks was that if I ever went a month without posting anything it was time to start thinking about shutting things down. And December 2009 came and went without a single post from me, so here we are.

I remember a teacher in grade school telling us that it takes 21 days to make something a habit and I think that, over time, not blogging became a habit for me. Whereas in the past I couldn't read a comic without multiple ideas for posts popping into my head, recently my default response to reading a comic has been simply enjoying it or disliking it with no further impetus to share my thoughts with the rest of the blogosphere.

There are probably many reasons why my enthusiasm for blogging has waned, but here are the biggest two from my perspective:

1. As with the last time I quit blogging, events in my offline life have conspired to eat up almost all of my free time. Simply put, I just haven't been able to devote as much time or energy to blogging as I once did.

2. My reading habits over the past few months have evolved to the point where I consider myself a much more casual comic reader. I'm not following as many blogs or sites as I used to. I don't track release dates obsessively anymore. I'm buying fewer and fewer books and choosing instead to read things through the library, usually long after everyone else has read and discussed them. All of this has probably contributed to a laid-back attitude that is less than conducive to blogging.

I guess what it boils down to is: The urge to write up my reactions to what I'm reading is just no longer there. In many respects, my comic reading habits have become more or less indistinguishable from my consumption of other forms of entertainment. Just as I've never really felt compelled to write about the movies or TV shows I watch, I don't feel driven to write about comics anymore.

Part of me worries that tomorrow I'll be flooded with ideas for blog posts and I'll regret announcing the end of this blog so definitively, but a bigger part of me believes that, in the long run, I'll be happy not to be bothered by little bouts of guilt when I realize days weeks months have gone by without any updates from me.

Thanks to everyone who has read, commented on, linked to, or reacted to this blog over the years. It was fun while it lasted. And who knows? Maybe in 2012 I'll be rested, re-energized, and ready with the final installment in my comic book blogging trilogy.

While surfing for more Mori artwork, I stumbled across this image: 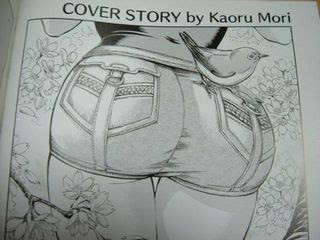 Another "cheeky close-up" provided here, apparently from the April 2009 issue of Fellows! magazine, although I have no idea what the cover story is about aside from very, very tight shorts.

Do I even want to know what this is about? Will it forever change my impression of Kaoru Mori? Will David Welsh's pledge to purchase anything illustrated by Kaoru Mori be put to the ultimate test???

Saturday, November 14, 2009
But Do They Cover Victorian Oral Hygiene?

So what are the odds that CMX will publish this for us Emma completists? 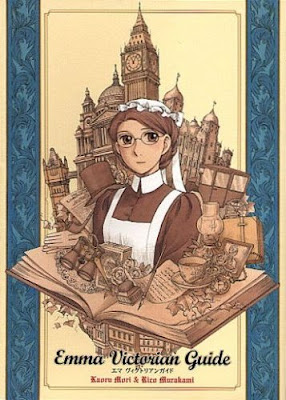 Does anyone know what the format of the book is like? Is there much new material by Mori? Google's translation of the Amazon Japan page leaves much to be desired...

David Welsh brightened my day with the thought of more Kaoru Mori manga that will hopefully one day be licensed for English audiences. Mori's latest manga is Otoyomegatari, and it looks like another lavish historical drama. Just look at this stunning illustration of the main character, Amiru: 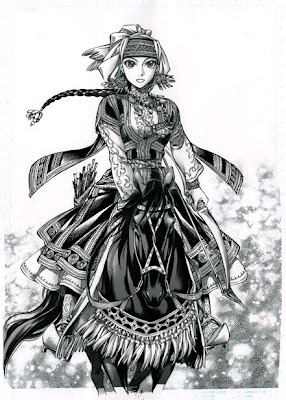 If you're anything like me, you hardly ever think of the effort that goes into the entertainment you consume so quickly, so it was enlightening to watch videos of Mori at work. Here's part one of the painstaking process behind this captivating picture:

What really blew me away about Mori's process was the fact that (at least for this illustration) she did all of the screentone work by hand! I'd assumed toning was all done with computers nowadays.

Anyway, it was a delight to spend part of the day watching a talented artist at work, so thanks to David for pointing this out. (Make sure to check out all six parts of the series.) And to share the joy, here are some additional images I found while poking around the Fellows! site: 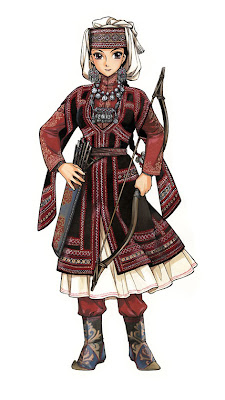 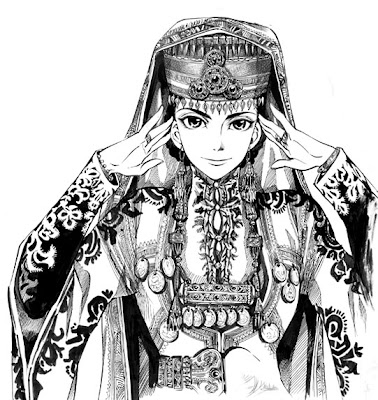 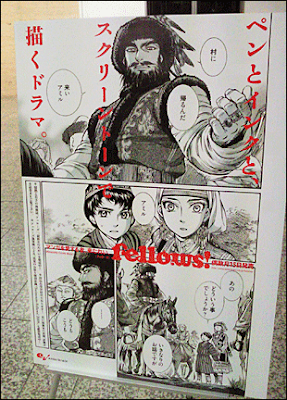 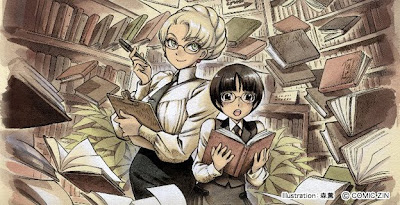 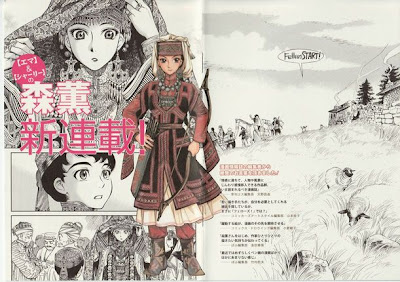 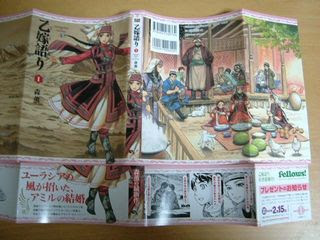 (Last two images found here. Above, a nice example of the wraparound covers Japanese tankōbon get.)
And for more Mori goodness, make sure to check out her blog! She often posts behind-the-scenes sketches, and she even shares the best vacation pics!

(My only worry is that CMX or other publishers may balk at publishing Otoyomegatari since it revolves around a twenty-year-old princess marrying a twelve-year-old prince and, according to this thread, the first volume depicts the bride sleeping in the nude with her young groom. But I was wrong about CMX being willing to show nudity in Emma, so who knows?)

As David Welsh pointed out, this is a huge week for new Viz releases. Just look at all the great new manga hitting shelves at the same time:
Which means (as David also pointed out) this is also a very expensive week for fans of quality manga series. Cover price for all six of those books would set you back a whopping $81.94, but I got all of them (plus vol. 6 of Takehiko Inoue's wonderfully wacky basketball comedy series Slam Dunk, the first volume affected by Viz's price increase on its Shonen Jump titles from $7.99 to $9.99) for only $51.37 at Buy.com. Buy.com's prices fluctuate like crazy so the same discounts might not apply by the time you read this, but when I placed my order Wednesday each book was discounted 40% or 41%. Add in this coupon for an additional 5% off your order and your effective discount is right around 44% per item. Not too shabby!

Sunday, August 16, 2009
Not The Brightest Blogger on the Block

I can't believe it took me this long to notice, but if you line up the first four volumes of the the VIZBIG edition of Vagabond on your bookshelf, the spines align to form a wonderful image of the central characters in the series: In my defense, I never had any two volumes anywhere near each other before this weekend, as my manga are scattered throughout the house in various locations. Wait, that's not much of a defense, is it?

I'm assuming this is a new illustration for the VIZBIG editions? Heck, even if it's just a montage of previous published material, it's still beautifully done and makes the already attractive (and bargain-priced) books an even better value. Kudos once again to Viz's design team for their outstanding production values.

My only gripe: Shouldn't the books line up in reverse order since the material all reads right-to-left? That's how I'd been arranging all of my other unflopped manga on the bookshelf, at least.