But First, The Audience Participation Portion of the Post: I'm trying out an idea for a new, possibly recurring, feature called "Reconsideration Reviews" where I take a second look at a series or creator I'd previously written off. I already have a couple books (all library copies) lined up that I'm thinking of reading and reviewing, but I'd also be willing to take suggestions. If there's something (or someone) you think I've unfairly disregarded, write to me and tell me why you think I should give it a second chance. I won't guarantee that I'll follow your recommendation, but you may remind me of something I've forgotten about and would be willing to try again. (And, please, only recommend things that are readily available in trade paperback. I'm really not interested in tracking down single issues of anything.)

With that out of the way, let's move on to the first Reconsideration Review. 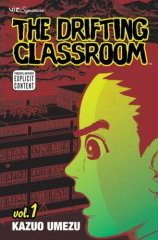 Previous Verdict: Unfavorable. I deemed Orochi: Blood one of the most disappointing comics of 2002, writing "the story was laughably bad - melodramatic and nonsensical" and "if Kazuo Umezu was attempting to give the impression that this tale was being enacted by dolls, he succeeded in his efforts." Ouch.

What Motivated Me To Reconsider: The near-unanimous positive reaction from the comics blogosphere.

Deal or No Deal? No deal. It's certainly an improvement over Orochi: Blood, especially in terms of the art, but it's still much too melodramatic for my taste. Here to explain the biggest flaw with Drifting Classroom is noted comic book creator and theorist, Scott McCloud: 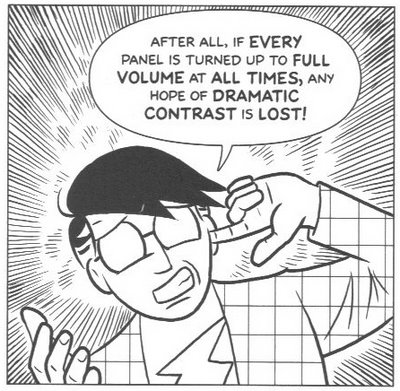 That, in a nutshell, is my problem with Drifting Classroom, a book that dares to be the sequential art equivalent of THOSE ANNOYING EMAILS YOU GET WHERE THE SENDER FORGOT TO TURN OFF THE CAPS LOCK!!!!

Seriously, here are some of the "quieter" opening scenes that happen before all the crazy "loud" stuff gets underway:

Sho learning that his mother threw out his marbles.

Sho imitating his favorite American superhero, Black Bolt.
When even mundane events are depicted with such earth-shattering force, there isn't any room to raise the intensity when events call for it. By the time we get to the bizarre occurrences promised by the book's title, we're already worn out by the ridiculous levels of emotion on display during the build-up. There's no shock left to register because it's all been spent. 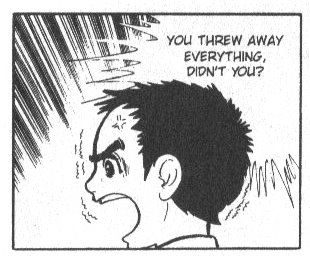 Sho's default mood.
(I believe he's sleeping in this panel.)
In his remarks on Drifting Classroom, Christopher Butcher wrote "it's a lot of fun to compare the 1970s suspense-horror of Drifting Classroom ... to Dragon Head." It is an interesting comparison, and one that I actually made while reading Drifting Classroom. Although in my case it was only to wonder what someone like Dragon Head creator Minetaro Mochizuki (or Junji Ito) could do with the concepts in Drifting Classroom. The basic premise of an entire grade-school building being uprooted and transported to god-knows-where is a fantastic idea for a survivalist horror manga; it's just not executed particularly well here.

Bonus Nitpick: Throughout the book, I was totally distracted by the way Umezu depicted Sho running. If there were a "Viz Direct" action figure of Sho running, the only things that would move would be the arms, and only at the arm sockets.