So apparently Marvel has decided it wants some of that negative press that manga publishers get whenever they make an edit in the art to censor something. The Groovy Age of Horror has scans illustrating some edits that were made in Essential Tomb of Dracula Volume 4. [WARNING: Unedited images are NSFW.] Of all the edits, the one below is my favorite because of the crazy properties of that strap. Why it is stretching like that? Is that really Mr. Fantastic's arm covering the woman's breasts? (You can see the original NSFW image here.) 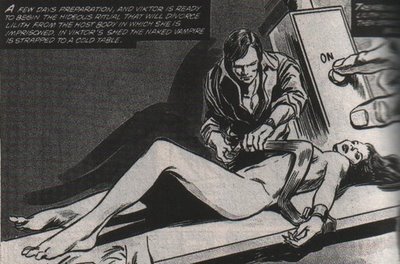 I think one reason fans get upset over edits like this is because the changes are so dull. Maybe if the edits were more creative, fans wouldn't get so riled up. Again, that image with Reed Richards molesting the poor woman's breasts is almost fun enough to make the censorship worthwhile, but it doesn't go far enough in my opinion. It should be even more ridiculous and absurd!

That's where you come in, dear reader: How would YOU edit this image (again, NSFW) to cover up the woman's boobies while still making the resulting image something appealing to the readers? Here's my effort: 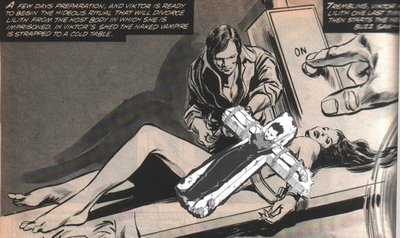 With this edit, Marvel achieves the dual objectives of: (1) covering up the naughty bits, and (2) appealing to hardcore manga purists who want to see the unedited image of a guy strapped to a stone crucifix in print.

Send me your altered images (via email or a link to your own site) and the best entry will win a special prize: David Welsh's copy of CMX's heavily-edited Tenjho Tenge Vol. 1!

UPDATE 9/21: Dirk Deppey made me realize that I forgot to thank Shawn Hoke for telling me about the Groovy Age of Horror link in the first place; and David Welsh made a "Marvel copying manga" joke before I did. Apologies to both for my lousy blogging etiquette. 10:00 AM | |